Kelly Kilmer was browsing social media a few years back when she came across a post from Dallas Real Producers. The magazine’s Area Director, Jordan Espeseth, was a member of her coaching group.  Intrigued by what she saw, Kelly vowed to do some research to find out more about the magazine.

At the time, you might say Kelly was “living the rat race.” She had a lot going on. She was a broker managing a real estate office (and selling real estate), a business coach to the national real estate community and others, a runner training for half marathons, and a mom / stepmom to five children. Launching a magazine was the furthest thing from her mind. Kelly’s motive for learning more? She considered herself a top real estate producer and wanted to be featured on the cover of something like Real Producers in her neck of the woods – Tulsa, Okla.

With so much on her plate, however, Kelly quickly forgot about the Real Producers product. But in late 2019, when she was looking for a venue near Oklahoma City to host a REALTOR® event for her coaching organization, she remembered. And a light bulb went off in her head. She located and reached out to the Area Director of Oklahoma City Real Producers. “I said, ‘I’m pretty sure you guys do events. I thought you might be able to help,’” Kelly shared. 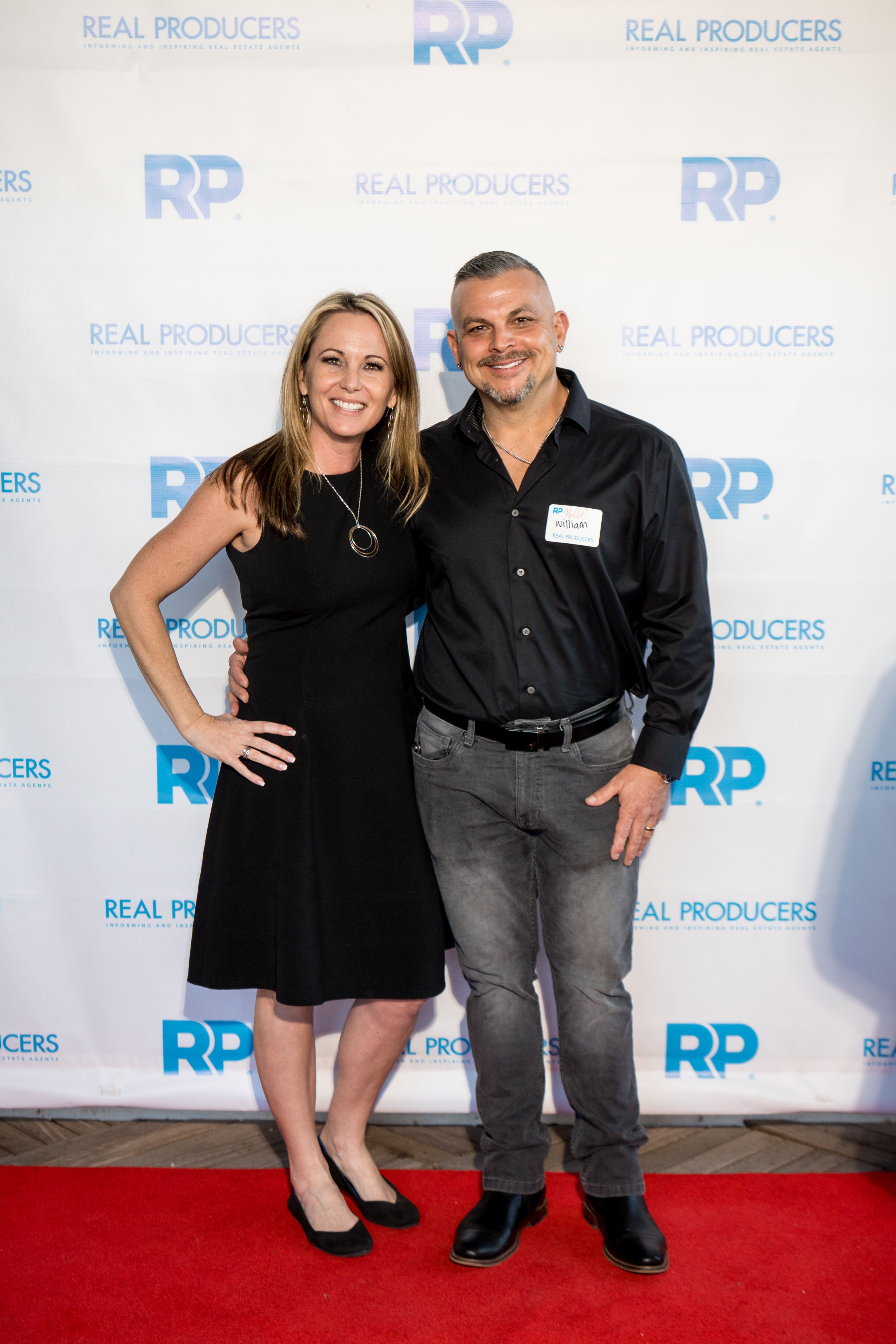 Kelly and her husband, William, pose for a photo at an Oklahoma City Real Producers event.

The Area Director provided Kelly with some leads for great event locations in the area. But when he learned she lived in Tulsa, he also mentioned that The N2 Company was looking for someone to launch a Real Producers magazine for that city. He thought she might know of someone who’d be a fit. The more he talked about the opportunity, however, the more Kelly thought that someone could be her. “That really sounds like me,” she told him. “That is absolutely me.”

Kelly applied for the Area Director opportunity, and in September 2019, she traveled to Chicago for N2 training. She was a little skeptical going in, thinking it might be a multi-level marketing scheme or something else too good to be true. But as she listened to CEO Duane Hixon and President Earl Seals speak, any doubts vanished.

She spent October “calming down” her booming real estate business. But by November, she was ready to start making sales appointments for her new magazine, Tulsa Real Producers. Her first deadline was January 25,  and the first issue hit mailboxes in March of 2020 – as luck would have it, right as the Covid-19 pandemic shut down numerous businesses, schools, and agencies. 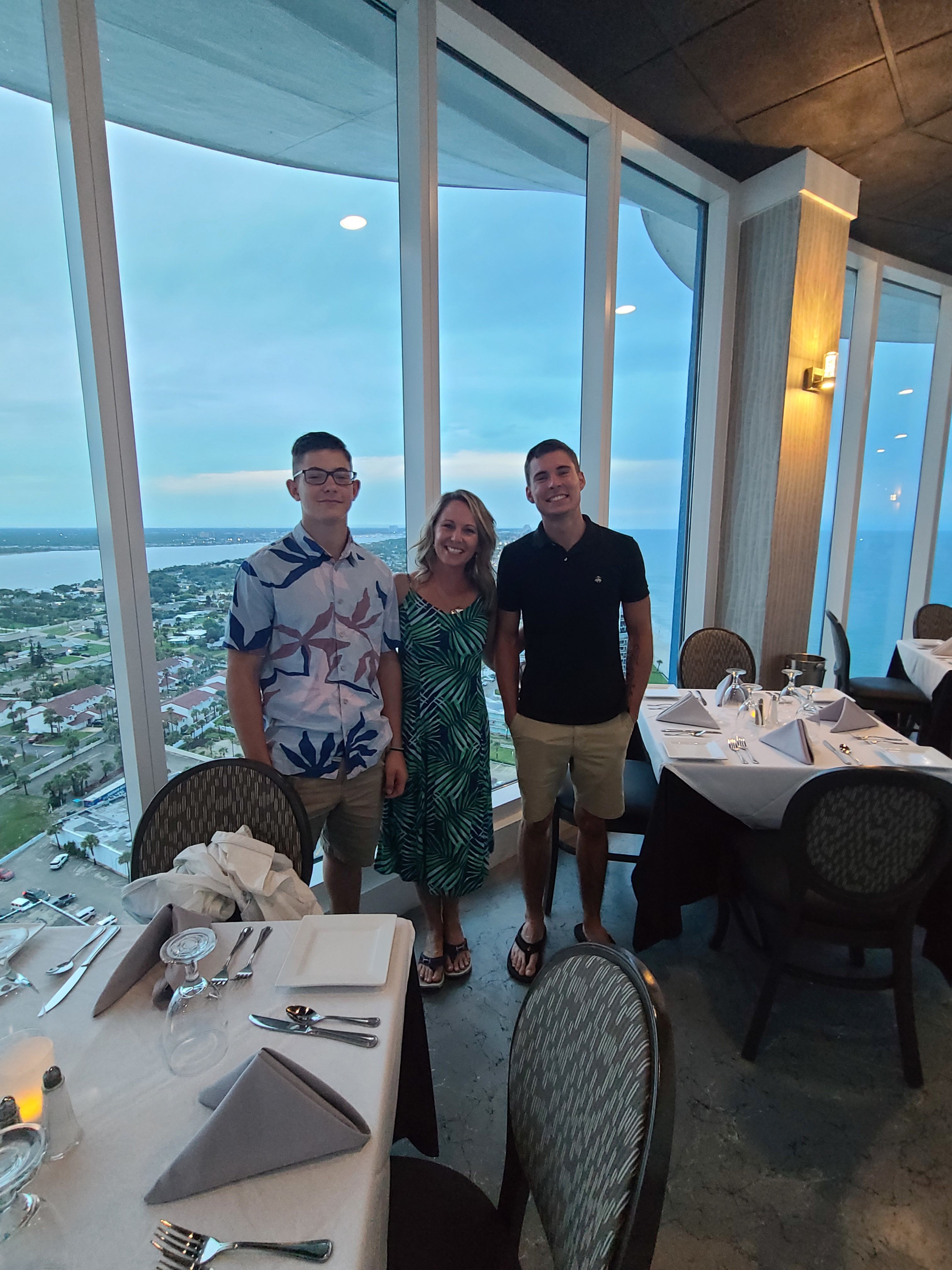 Kelly enjoys some quality time with her son, Jeffrey (left), and her son, Hunter (right).

Kelly had to pivot fast. She built an online platform reflecting the brand’s tagline: “Connecting. Elevating. Inspiring.” She moved meetings to Zoom and streamed interviews to Facebook. As restrictions eased a bit, she even held a small, in-person event for her preferred advertising partners and real estate agents who’d been featured so far in the magazine. The strategy worked. “We grew every single month through 2020,” Kelly said. “It exploded.”

Between running Tulsa Real Producers and managing the real estate office, Kelly had plenty to do. But as an old adage contends, “If you want something done, ask a busy person.” So when Oklahoma City Real Producers was in need of a new Area Director, N2 asked Kelly if she’d be interested. She jumped at the chance, adding that magazine to her plate in October 2021. (Along the way, she also launched an N2 BeLocal publication!)

Both of Kelly’s Real Producers magazines recognize top real estate agents and rising stars via cover stories in the monthly print issues. But as a business coach, Kelly also tries to include coaching content in each issue addressing the challenges of today’s top-producing agents – things like how to build a schedule or deal with difficult clients. “We love when our advertising partners provide coaching content, like a home inspector who shares ‘the top 10 things you can do to make your home inspection smoother,’” she added.

Via her Real Producers events each year, Kelly goes beyond the print issues to make a positive impact on the real estate community, too. An annual awards gala for each market recognizes agent achievements. That recognition is especially appreciated in the Oklahoma City market, where agents tend to work for brokerages that are much too small to host their own celebrations of achievements.

But perhaps even more valuable for agents are the 10 other networking events – which vary in type, location, and even time of day so there’s something for everyone. Because most real estate transactions now occur via text message – and buyer / seller closings don’t take place in the same room – real conversations between agents representing opposite sides of a sale are rare. “When you get them together outside of that, when they’re able to be more frank and honest and be themselves, it facilitates those relationships a lot,” Kelly said. “Across brokerages, too.”

Many ‘Ways to Win’

The networking events can work magic on the advertiser side, too. At one recent networking event, a longtime Tulsa Real Producers advertiser walked up to Kelly while she was in the happy hour line talking with a real estate agent. Kelly introduced the advertiser to the agent, and when the agent learned he was a roofer, she was thrilled. The agent had just fired a roofer after a horrible experience and needed roofing for three properties immediately. “He said, ‘I’m here to help,’” Kelly shared. “By the next day, he was out working with her. And he came back to me a week or two later and said that the introduction changed his business for the next several months, if not forever.”

The networking events are just one of several “Ways to Win” Kelly offers to advertisers. She provides each advertising with a printed list outlining all the things an advertiser could choose to do to realize a positive experience. In addition to print advertisements and event participation, opportunity can be found in social media, contributed coaching content, and more. “Some pick and choose the things they want to do, and some do all of them,” Kelly explained. 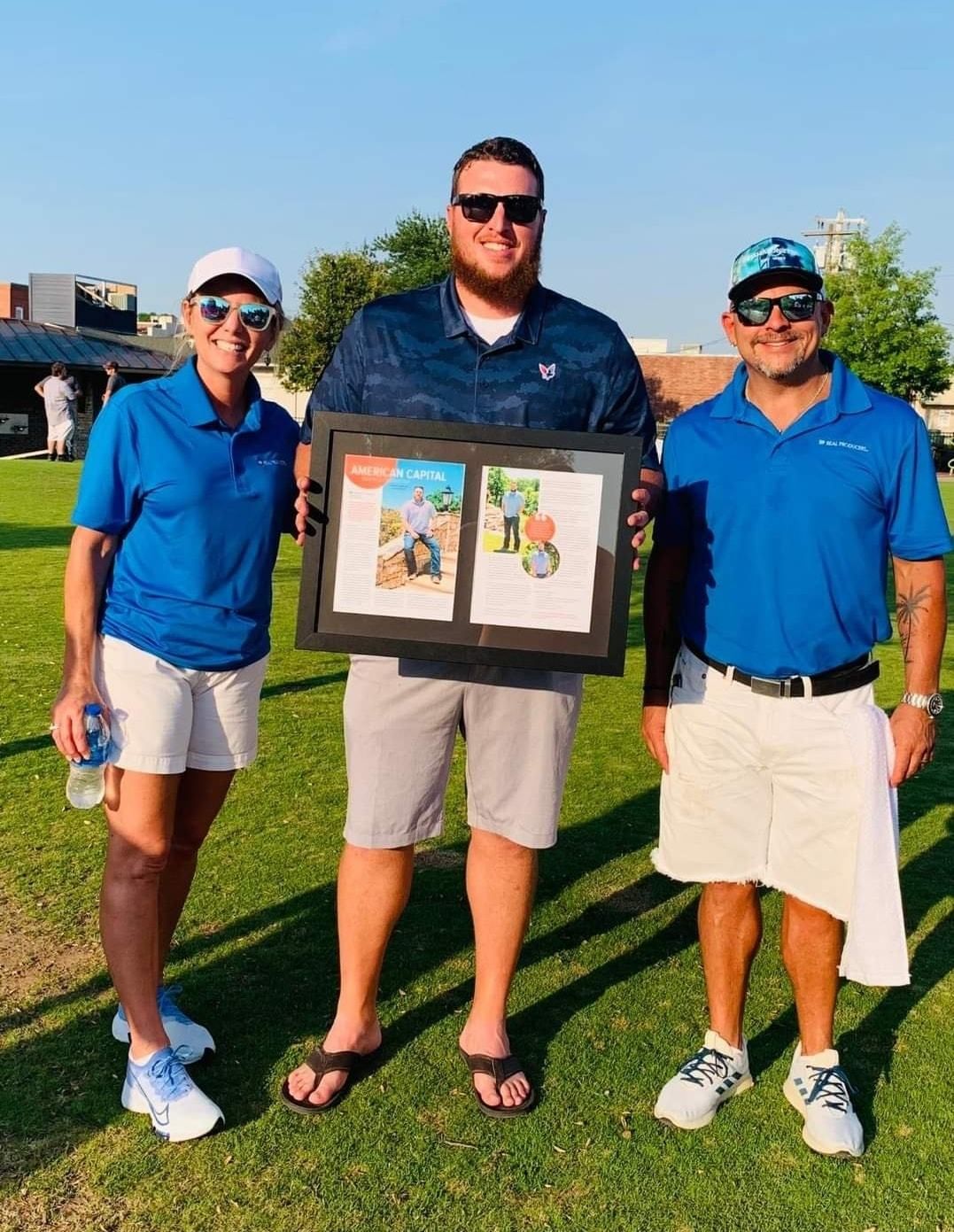 Kelly and her husband, William, present a framed article to a Real Producers business partner (center).

It Takes a Village

With two Real Producers publications to run and other professional obligations, Kelly certainly has a lot on her plate. So she’s a big fan of time-blocking to make the most of her days. “The business coaching side of me is all about productivity,” she said. “I lay out a week of blocks of the most important things, which include morning routines for exercise and taking care of my mental health and everything else.”

Thankfully, Kelly also has a great team to support her on the Real Producers brand. Her husband of eight years, William, co-owns the franchise. He and Kelly were high school sweethearts who separated after high school, but reconnected 20 years later. William takes care of the back end of operations, handling tasks that include bookkeeping, ad management, collections, and more. Together, they work hard to keep their aging summary (collections) close to zero.

Much of the writing and photography are outsourced, of course. But Kelly also relies on a full-time Content Coordinator / Social Media Director working across both Real Producers magazines, as well as BeLocal. Another Content Coordinator is dedicated to Oklahoma City Real Producers. In addition, an advertising partner exchanges her event-coordinator talents for ads in the publications. “I’m very knowledgeable and leveraged because I was a business coach, so I could run things myself and we’d do an OK job,” Kelly said. “But for it to be really great, there’s just not enough hours in the day.”

Her impressive time-blocking skills and fantastic support staff – combined with her skills in real estate, networking, and coaching – allowed Kelly to quickly attain what Duane and Earl said was possible during training: a great income and the flexibility to take time for herself. “It is real. I can take real vacations,” Kelly stressed. “I mostly have my nights and weekends back. I’m out of the rat race.”

Apply to Be a Real Producers Area Director

She Has the Best Real Estate Gig in Wichita